You Have Work To Do Here, "Joe" 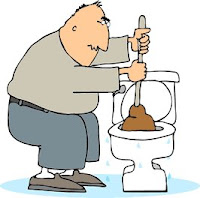 It looks like the right-wing Pajamas Media kids have a new "war" correspondent: none other than Joe (really Sam) the Plumber (not a plumber). He's being sent over to Israel for 10 days to interview average Israelis about the continuing fighting in that region.

So, he's not going to Gaza, where the fighting actually is (since correspondents aren't being allowed in at present), and he'll most likely be parked in an outdoor cafe in Tel Aviv or on the beach at Haifa with a microphone interviewing some hapless Israelis who couldn't avoid him in time. Good to know that the 101st Fighting Keyboarders at Pajamas Media are serious about this conflict. A pretend plumber, pretending to be a "war" correspondent. Maybe he'll come back with a real tan on that empty bald head of his.
Posted by Hackwhackers at 10:48 AM