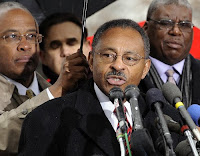 Illinois Sen. Roland "Look Everybody, I'm A Senator!" Burris apparently wasn't truthful in his sworn statement that he had no discussions with anyone in former Gov. Rod "Let's Make A Deal" Blagojevich's camp concerning the vacant Senate seat. Burris has had no fewer than 5 different versions of his contacts with associates of the former Governor and future jailbird. Now, he's admitting that he tried to raise campaign funds for the former Governor at the same time that he was asking the Rodmeister to appoint him to the Senate. Uh, sort of like "pay to play?"

Burris was an embarrassment to begin with, someone looking for a fast track to "glory" that he hadn't achieved in previous elections. Today, calls for his resignation are growing, with the Washington Post and Chicago Tribune being the latest. The Senate Ethics committee will be looking into this latest twist, with the potential for Burris to be expelled for giving false testimony. It's unlikely that this goof will leave quietly or quickly. This was his big chance at fame, but he couldn't keep his story straight or, apparently, honest.

(photo: Burris giving version #12 of his contacts with Blagojevich's office)
Posted by Hackwhackers at 11:24 AM

Burris should never cave in to this nonsense. They accepted him and that was it until he's out. Unless blatant evidence comes out, leave him alone.