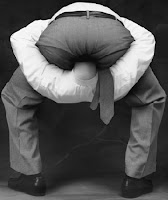 Borrowing a term from Howie "Get That Job? Kurtz, we're going to start what we think may be a short-lived adulation boomlet for Gov. Jingles. Entry number 1: Michael "Mushroom Cloud" Gerson's thrill up the leg paean in today's WaPo. In it, please note MC has the howler "Some have compared Jindal to Obama, but the new president has always been more attracted to platitudes than to policy." Yeah, you nailed it, MC!! I would never think of Obama as a policy wonk in the same league as your boys Ronnie "3x5 Card" Reagan, George "Dumbya" Bush, and now Bobby "Don't Show Me the Money." What planet is this guy living on? To have seen Jindal last night (see below) is to have seen all the shop-worn, failed policies and platitudes the Rethugs have been living on for more than 30 years*. If Jingles is Gerson's and Pills' Great Brown Hope, then you know he's really bad news.

Once again, the WaPo is allowing itself to be the platform for the worst elements of the Republican "Party" and its water carriers.

*Update: On the other hand, the usually reliably Rethuglican David Brooks thought what Jingles said was insane. Well, shut my mouf!

(Photo: Mushroom Cloud getting a bit of fresh air)
Posted by W. Hackwhacker at 2:35 PM