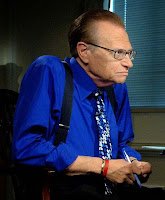 (Without apologies to Larry King)

Ever notice how Cokie Roberts has nothing original to say? She's the longest-running Villager on Sunday morning "news programs."

And George Steponaflagpinopolous? I think he sits next to George Will so he doesn't have to throw his softballs that far. Also, I think he likes to have his nose as close to Will's crack as possible.

Speaking of cracks, grilled cheese sandwiches give me gas.

Grilled cheese sandwiches made with pepper jack cheese give me molten gas.

I've got ten bucks that says Tin Man Steele will father a child by Missy McConnell this year. Any takers?

A tip of my hat to my recently departed pal, Paul Harvey. He was Rush Limpballs before it was cool.

Can someone get me some of whatever it is Glenn Beck is taking these days? That's some powerful stuff!

That just about wraps it up! Got that pepper jack grilled cheese ready, hon?
Posted by W. Hackwhacker at 3:45 AM