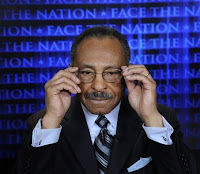 Newly released FBI wiretap transcripts show that Sen. Roland "Emburrising" Burris may be in for a world of trouble over the pay-to-play auctioning of the Senate seat by former Gov. Rod "Let's Make A Deal" Blagojevich. The transcripts show that, in talking with Blago's brother, Emburrising clearly wanted to get the Senate appointment, but was wondering how to get campaign contributions to the former Governor without being discovered.

He's changed his story multiple times in sworn affidavits and testimony, and in the media. There may now be evidence of perjury committed when he testified under oath in the former Governor's impeachment trial that there were no contacts on the subject of contributions in exchange for appointment to the Senate. His ego won't allow him to go voluntarily; he saw this appointment as the highlight of his career, something he had a stong hunger for. Now, it may earn him expulsion and possible time in jail.
Posted by Hackwhackers at 10:14 AM