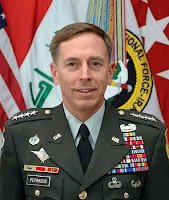 Gen. David Petraeus, commanding officer of all U.S. forces in the Middle East, said in an interview Sunday on Radio Free Europe that President Obama's decision to close Gitmo and to end torture of detainees would benefit the U.S.'s fight against terrorism. In doing so, Gen. Petraeus clearly sided with the President against former (Vice) President "The Dick" Cheney, who has been popping up everywhere to claim the opposite.

When he devised the militarily successful surge strategy for Iraq, the wingnuts allowed themselves a premature victory lap, even though Gen. Petraeus was far more cautious and skeptical about the Iraqi government's follow through on reform and reconciliation. Now, no doubt, these very same wingnuts are pounding their tiny fists in anger at Petraeus' rejection of The Dick's statements. Of course, they can always release that anger by enlisting in the armed forces, but as The Dick with his five deferments during Vietnam, they probably have "other priorities."
Posted by Hackwhackers at 11:08 AM