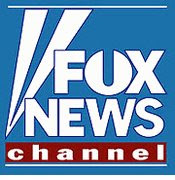 In an interview with CNBC's John Harwood yesterday, President Obama singled out the Fux News Channel as the biased outlet for Rethug talking points that it is:

"I've got one television station that is entirely devoted to attacking my administration. . .you'd be hard pressed if you watched the entire day to find a positive story about me on that front."

From the execrable "Fox and Friends" in the morning through Bill O'Liely and Uberschmuck Hannity in the evening, it's wall-to-wall anti-Obama propaganda, conspiracy theories, and recitation of official Rethug talking points. The president of Fux News is Roger "The Rethug" Ailes, a long-time media consultant to Rethuglican politicians, from Nixon to G.H.W. Bush.

Good that the President is calling it like he sees it.
Posted by Hackwhackers at 11:35 AM