"Tools of the Trade" 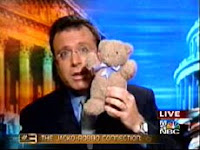 WaPo snark Dana "It's a Masculine Name!" Milbank strikes again today with another insipid broadside, this one on the "planted" question at President Obama's Tuesday news conference. Milbank, who gives "jaded" a bad name, was rightly smacked by Media Matters, LGM in "Tools of the Trade", Wonkette, and HuffPo's Jason Linkins. The HuffPo piece has the video of Milbank and fellow WaPo Villager Chris "I Like to Make Lists" Cillizza in dress-up, trying to be funny (and failing miserably).

One of Milbank's recent targets has been the health care debate in Congress. Rather than lampooning, in his own jejune way, the Rethugs who are trying to derail any health care reform, in league with the insurance industry, Milbank chose to go after the representatives of the weak and vulnerable. And the HuffPo reporter's question? Milbank didn't even bother to repeat it. Haha! What a funny guy (?)! And that fellow "sociopath" (h/t Wonkette) Cillizza! That WaPo is into some serious journalism with those two!

(Photo: Milbank with Cillizza in hand, two "tools" of the trade)
Posted by W. Hackwhacker at 6:22 PM