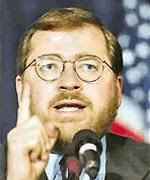 "He was given everything he had in life. He didn't earn anything. He is Thurston Howell III, and he has the nerve to say to people who built small businesses, restaurants and gas stations that they should have their money stolen from them." -- Grover Norquist, anti-government, anti-tax, "Gilligan's Island" connoisseur and all-around dimbulb, on Sen. Ted Kennedy. In other words, Norquist would have approved of Kennedy more had he been true to his "class," and been a selfish, conservative p.o.s. like himself.
Posted by W. Hackwhacker at 10:39 AM