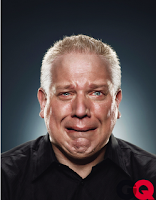 Less than one week after accusing President Obama of hating white people -- presumably including the President's own mother and grandparents -- Fux's mentally disturbed star Glenn "Dreck" Beck did a schtick on his program where he imagined poisoning House Speaker Nancy Pelosi's drink. The HuffPo has the video.

Apparently, Fux will allow Dreck to swim in the sewer as long as he likes, despite losing such sponsors as Procter and Gamble in recent days. Meanwhile, the rest of us are just waiting for Dreck to have a career-ending on-air psychotic breakdown, so that even his cynical, wingnut employers will feel a rare sense of shame and pity for this damaged person. Until then, fix that drink, but you go first Dreck.
Posted by Hackwhackers at 10:15 AM