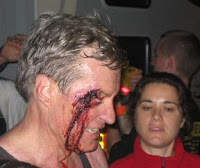 Sen. Max "Thank You Sir, May I Have Another?" Baucus has finished his health insurance reform bill, after giving the Rethugs cover during the summer to stall and build up their mob of angry and ignorant white folks. So what kind of Rethug, "bipartisan" support did Thank You Sir get? Nada. Zip-o-dee-doo-dah.

Well done, sir! Thank You Sir and the other conservative Dems who think that giving the Rethugs what they want will actually get them to vote for a piece of legislation have been had again. Meanwhile, time was lost, the debate was cast in the wingnuts' terms, and the Senate is no further along than it was in the spring as far as a bipartisan bill.

(photo: "My esteemed Republican colleagues have convinced me to drop the public option for health insurance. It's been a pleasure working with them.")
Posted by Hackwhackers at 1:44 PM