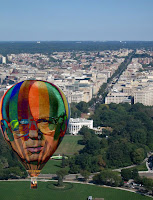 "It is now as certain as anything can be in politics that 2010 will be a painful year for Democrats -- a year of high unemployment, staggering deficits and a growing list of casualties from an unresolved war." -- Dean of Washington Gasbags David "Broderella" Broder in today's Kaplan Daily. Certain?!? It's 11 months until election day 2010. If events change and change again as they have in the last 11 months, at the beginning of which Democrats were riding very high indeed, who's to say with certainty what the political landscape will be? Only the most lazy gasbag who gets his deep thoughts over lunch paid by a Rethug spinmeister, that's who. I'm cutting this op/ed out for revisiting ll months from now.

(Image: The Dean of Gasbags, aloft)
Posted by W. Hackwhacker at 3:59 PM