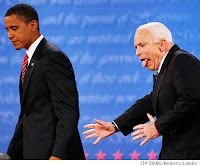 Arizona Sen. John McNasty is running scared in his re-election bid for the Senate. Faced with a far right-wing challenger in the Rethuglican primaries, McNasty is running a campaign ad saying, "I stand in [Obama's] way every day."

This, from the "maverick" who tried to sell himself as an independent, courageous conservative who was willing to work with Democrats. You know, to achieve "something greater than our own self interests." Riiiight, Johnny. Since Obama's inauguration, McNasty has voted in a block with his Party of No: against the stimulus package, against raising the minimum wage, against health insurance reform, against every piece of legislation that would represent a victory for the man who whipped his ass in 2008. Bitter much?

(photo: McNasty's having a hard time standing in the President's way)
Posted by Hackwhackers at 2:24 PM