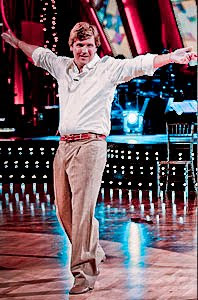 It appears that failed TV wingnut pundit Tucker "Mothertucker" Carlson has launched a new web "venture" -- if by venture you mean something destined to end in the toilet. He's calling it "The Daily Caller" and it's supposed to be about "covering the people in power", i.e. another right-wing smear site.

Mothertucker claims that the site will play it straight, but what does his venture look like? His partner is a former aide to The Dick, his opinion editor is a former Rethuglican National Committee press secretary, and his web is receiving major funding from a big-time Wyoming Rethuglican donor. (The subheading to Zowie Howie Kurtz's WaPo piece in the print edition is "Tucker Carlson and company say their site will maintain nonpartisan civility." Yes, and Jesus rode dinosaurs.)

"The Daily Caller:" we're betting most people won't be answering the calls.

(photo: Ta-da! Mothertucker announces his new web site with uncustomary fanfare)
Posted by Hackwhackers at 11:18 AM