Jobs? Not With Rethuglican Policies 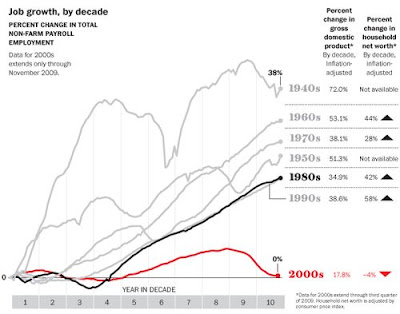 This graph from the WaPo illustrates the myth that Americans are better off under Rethuglican / conservative economic policies. Note that in decades where Dems were either in the White House or Congress, or both, Americans' net worth increased -- during the Clinton years they rose the highest (58%). When the Rethugs controlled both the White House and Congress from 2000 to 2006, net worth declined 4 percent, and it wasn't that great in the Raygun / Poppy Bush '80s. And as for job growth, it was almost flat under Dumbya.

And they want to defeat Obama and return to the economic policies of tax cuts for the wealthiest Americans. It's their only idea.

(h/t to Andrew Sullivan)
Posted by Hackwhackers at 11:22 AM