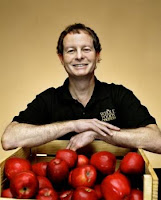 Whole Foods CEO and extreme right-wing libtard John "Galt" Mackey is already known to be an anti-union, anti-health care reform advocate. You can now add "global warming denier" to that list. Mackey claims, in a New Yorker interview, that there's "no scientific consensus" on global climate change. Mackey would be on safer ground arguing against evolution, with himself as a case in point.

Whether or not one wishes to shop at Whole Foods, given Mackey's radical views, is an individual choice. As for this individual, Costco, Trader Joe's and good ol' Safeway are good enough for me.