Bad For What Ailes You 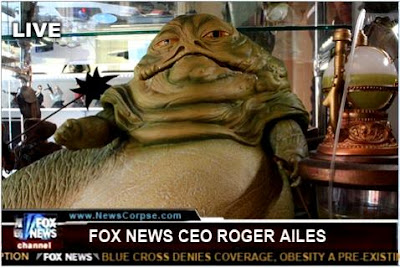 Watching Fux "News" Channel chairturd Roger "Jabba" Ailes yesterday on ABC's "This Week" reinforced the fact that his operation is the media arm of the Rethuglican Party. Throughout the panel, Jabba repeatedly and openly defended the programming which has declared political war against the Obama Administration. He even mockingly said Fux was "fair and balanced" -- to the snickers of co-panelists Paul Krugman and Arianna Huffington -- when asked to explain why Fux cut away early from Obama's triumphant smack down of House Rethugs at their Baltimore retreat. He repeated false Rethug talking points about health insurance reform, and proudly dropped the names of his former bosses Tricky Dick Nixon and St. Ronnie Raygun of Hollywood. His defense of the decision to add Alaskan grifter Winky You Betcha to his channel's "commentator" roster was laughable, but it fits his plan to use Fux as a Dem-and-Obama-bashing outlet for at least the next 3 years.
Posted by Hackwhackers at 3:41 PM