A Most Understanding Congressman 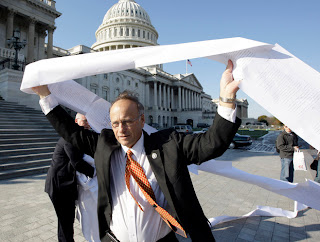 Iowan wingnut Congressman Steve "Lyin'" King is known for his extreme right-wing views, the latest of which was a sympathetic shout-out to the disturbed pilot who crashed into the Austin, TX IRS office. Lyin' and fellow winger Michelle "I See Commies" Bachmann are two peas in a pod when it comes to rabid views.

Now Lyin' is going full disclosure mode, and dropping all pretense about who pulls his strings -- it's K Street lobbyists. He's quoted as saying:

"Lobbyists do a very effective and useful job on this hill. Somebody needs to stand up for the lobby. It is a matter of providing a lot of valuable information."

Hmmm, yes. The poor lobbyists need someone to stand up for them, and to take their campaign contributions. And Lyin' King is just the Congressman to offer his assistance. Hope this nugget finds its way into his Congressional race in the fall -- the teabaggers will just love it.

(photo: Rep. Lyin' King holds up a list of corporate lobbyists that he feels honor bound to represent)
Posted by Hackwhackers at 3:56 PM