Another Day, Another Wingnut Terrorist 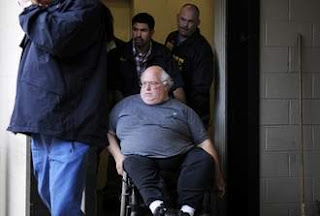 Federal prosecutors have charged that a Tyler, TX man left pipe bombs in multiple mailboxes in part because of his anger with the Federal government. Larry "Sloth" North, whose appearance closely resembles Pills Limpballs, distributed 36 explosive devices over the past month in mailboxes. Check out this vignette of Sloth from the Tyler Morning Telegraph:

"Tyler ATF agent Clay Alexander said at least one more explosive device was found in the handicapped-equipped van North was driving. Because of North's size and no special ramp available, trusties had to lift the man into the back of a Smith County Sheriff's Department van."

From the looks of him, it's hard to imagine him escaping quickly from a bomb set to explode. Actually, a prison diet might save his fat ass.

(photo: The big bomber being wheeled off to jail. "Glenn Beck said whut I wuz doin' wuz OK")
Posted by Hackwhackers at 1:28 PM