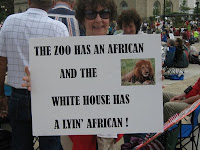 And while we're at it, teabaggers aren't uninformed, stupid, far-right crackpots either!

Why would Centerfold Brown (see below) want to keep his distance from these nice people?