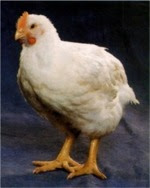 We've been remiss in not joining the crowd in exploring the lunacy of Rethug Senatorial candidate Sue "Cluck Cluck" Lowden, running against Harry Reid in Nevada. Here's TPM's (via Germantown bureau chief Brian) helpful breakdown of the implications of Cluck Cluck's health care "plan," which involves using chickens to barter for one's care.

What is it with Rethugs and chickens? After all, wasn't it Herbert Hoover that promised Americans "a chicken in every pot?" Maybe he was just being prescient in planning for his political descendants' use of the noble bird?
Posted by W. Hackwhacker at 5:33 PM

Thanks for the shout out and for representin' us on your blogroll! Now we'll be famous for sure!