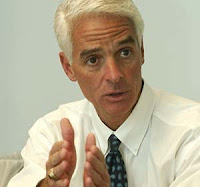 According to reports, expect Florida Republican Gov. Charlie Crist to announce this afternoon that he's going to drop out of the Rethug primary (which he's losing badly to far right, tea baggin' Marco "Boobie-o" Rubio) and run for Senate as an independent. Such a 3-way race increases the odds of two outcomes that are unfavorable to the Rethuglicans and their base (tea baggers): Crist wins as an independent (who knows, he might caucus with the Dems in the Senate), or Democrat Kendrick Meeks wins (much less likely, but more possible now). Meanwhile, the Rethugs just lost a guy who was one of the top candidates for their VP nomination in 2008. Speaks volumes about the extremists calling the tune on the right these days.
Posted by W. Hackwhacker at 3:42 PM