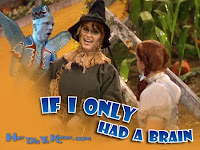 Wonkette reports on the latest dumbassery from Fux News' shining star, Winky You Betcha, this time on Sean "Heil" Hannity's cavalcade-of-wingnuts tee-vee show. Check out who she cluelessly tags as a "lamestream media" outlet where she saw a caption saying Arizona's law made it "illegal to be an illegal."

As they say, if brains were gunpowder, Winky wouldn't be able to blow her nose. Now, what does that say about the geniuses who hired her? And her fans?
Posted by W. Hackwhacker at 5:29 PM