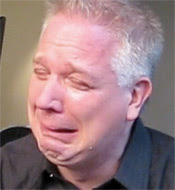 Think Progress observes that in Fux News' new promotional ad, a Fux personality is conspicuously missing: Boo Hoo the Hoot Beck. Could it be because Boo Hoo's ratings have dropped almost 30% since January? The advertiser boycott launched last year has resulted in many dozens of companies refusing to air ads during his nightly hallucinations, with the exception of gold-selling con men and makers of hemorrhoid creams.

Maybe Boo Hoo will address this oversight on his chalkboard soon; perhaps he can draw an analogy to the Soviets' habit of airbrushing purged commissars from photos.
Posted by Hackwhackers at 2:52 PM