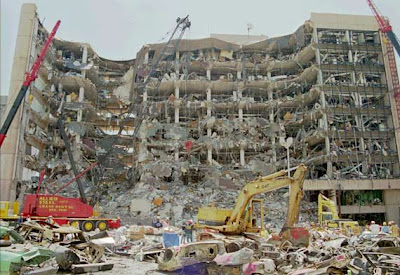 Today is the 15th anniversary of the bombing of the Federal Building in Oklahoma City. The bomb was set by far right extremist Timothy McVeigh and it killed 168 people, including children in the building's day care center. Tonight on MSNBC, Rachel Maddow will devote an hour to dissecting the motives of the bomber, and the ominous parallels to today's revived hate groups on the right.

Today, in fact, several right-wing militia groups and assorted gun nuts are collecting across the Potomac River from Washington, DC to vent their rage at the Government. The WaPo (no link) describes the organizers:

"On the lineup are several heroes of the militia movement, including Mike Vanderboegh, who advocated throwing bricks through the windows of Democrats who voted for the health-care bill; Tom Fernandez, who has established a nationwide call tree to mobilize an armed resistance to any government order to seize firearms; and former Arizona sheriff Richard Mack, who refused to enforce the Brady law and then won a Supreme Court verdict that weakened its background-check provisions."

If that lineup doesn't sound an alarm, we don't know what will. Nevertheless, expect the mainstream media to describe the gathering as a group of "concerned gun owners" and "average Americans," you know, just like Timothy McVeigh was.

The militia nuts like to portray the actions of a democratically-elected Congress and President as "tyranny" which they are obliged to resist with force if necessary. In essence, they believe that majority rule can be overthrown by intimidation through threats of violence. They'd be wrong, but would anyone rule out the possibility that among these inflamed assholes are more Timothy McVeighs hearing the siren call to violence?
Posted by Hackwhackers at 8:37 AM