Rethugs to Wall St. Predators: We're on Your Side! 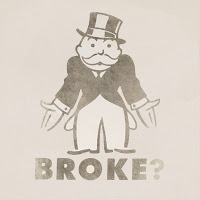 Senate Rethuglicans are busy trying to undermine new financial industry reform legislation, after their party was responsible for massive deregulation of that industry which led to the financial crash of 2008. Senate Rethug leader Mitch "Missy" McConnell and Texas Sen. John "Big John" Cornyn met last week with Wall Street executives to urge them to support the Rethug effort to defeat reform, which they say would be bad for Wall Street. Nothing like understanding the mood of America. Let's see how many teabaggers protest that move.

(Image: Broke? Don't worry, the Rethugs will come to your rescue.)
Posted by Hackwhackers at 11:43 AM