When You "Think" With The Gut, Poop's the Product 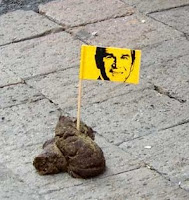 This exchange between Russian leader Medvedev and ABC's George Steponaflagpinopolus speaks volumes about why the international community is relieved to be dealing with President Obama:

MEDVEDEV: [Obama's] a very comfortable partner, it's very interesting to be with him. The most important thing that distinguishes him from many other people -- I won't name anyone by name -- he's a thinker, he thinks when he speaks. Which is already pretty good.

STEPHANOPOULOS: You had somebody in your mind, I think. (LAUGHS)

MEDVEDEV: Obviously I do have someone on my mind. I don't want to offend anyone.


Oh go on, we know who it is anyway.
Posted by Hackwhackers at 2:57 PM