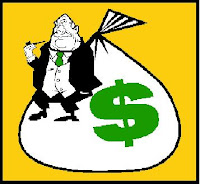 On cue, the 41 Rethug Senators have signed a letter saying they'll oppose bringing the financial reform bill up for debate and a vote. Also on cue, the Rethugs are using the focus-group tested line of attack offered by Rethug hack Frank Luntz: "To defeat reform, just call it a bailout!" The Rethugs look to get campaign money from the bankers and Wall Street (viz Missy McConnell's and John "Boner" Boehner's reported sales pitches to Wall Steet fat cats -- see April 14 posting). Also, why give Obama another legislative victory?

Also on cue will be the media's balancing fact with fiction and declaring both legitimate.
Posted by W. Hackwhacker at 2:37 PM