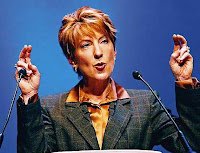 We had to smile at the revealing, open microphone moment of California Rethug Senate candidate Carly "Snarly" Fiorina. Before an interview started on Sacramento's KXTV, Snarly made some catty comments about Sen. Barbara Boxer's hair, and questioned why Rethug candidate for Governor Meg "Mega Bucks" Whitman was appearing that day on Sean "Heil" Hannity's show (apparently, there's no love lost between fellow Rethugs Snarly and Mega Bucks to say the least). Meowww! This is the "lady" that was a McNasty advisor in 2008, but was kicked off the campaign bus after saying that neither McNasty nor Winky was qualified to run a corporation (true, of course, but neither was Snarly -- more about that later).

While there are numerous wingers in the Golden State, they're far outnumbered by Dems and independent voters who don't like the right-wing extremism that Snarly exploited in the primary. Look for Snarly to tone down the hate speech. Also, she's going to have to spin why the Board of Directors of Hewlett Packard kicked her out as CEO in 2005; most observers say she ran with bad ideas, including a merger with competitor Compaq, and HP stocks jumped after her firing. Fair warning for voters in California.

(photo: "I'm like a Texas longhorn: a point here, a point there, and a lot of bull in between!")
Posted by Hackwhackers at 12:04 PM