As the Wasilla World Turns, Cont. 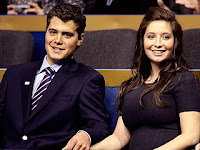 As we suspected a while ago, the engagement of Bristol Palin and Levi "Big Johnson" Johnston is toast. Saying "he played me," a tearful Bristol says she cut off Big Johnson (hee hee) on the same day they announced their engagement in a US Weekly cover story. Talk about a cover jinx!

Mama Grizzly/ Winky You Betcha issued a statement saying, "Without fear of refudiation, I have to say that girl is dumber than me!" No, actually, she said hopefully in the future Bristol will "know to trust but verify." Leave it to Mama Grizzly to drag St. Ronald Magnus Reaganus into the star-crossed couple's sordid little drama.
Posted by W. Hackwhacker at 6:07 PM