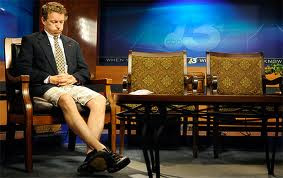 Stories about Kentucky Rethug candidate for Senate Rand "The Sprinklerhead" Paul get more bizarre as time goes on. Now, in a profile in GQ Magazine, a woman told the interviewer that while she and The Sprinklerhead were students at Baylor University, she was abducted by the erstwhile "libertarian / conservative" who tried to force her to take bong hits. Apparently The Sprinklerhead and an accomplice had been smoking weed when they had this brilliant idea. Must have been real fun on a date. . .or maybe that was his problem. We'll see what this does in Kentucky among the "family values" Rethuglicans.

We're giving The Sprinklerhead the benefit of the doubt, since he undoubtedly was "going Galt" at the time, and therefore not in his right mind.