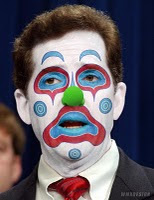 Yesterday's column by Kaplan Daily business columnist Steven Perlstein takes on the toxic, shut-the-government-down philosophy of SC radical wingnut Sen. Jim "Demented" DeMint. He warns business that while some facets of Demented's "agenda" may be appealing to them, the overall effect would be gridlock: on trade agreements, on tax policy, and other issues. He cautions business:

"I know what you're thinking. You're thinking that, once the heat of the election season has passed, cooler heads will prevail and DeMint and the other anti-government zealots will return to their rightful place on the fringes of the political system, leaving it to the grown-ups to get things done. Don't kid yourselves. You're about to create a political monster that you can't control, one bent not on reforming but on destroying the institutional framework that allows an advanced industrial economy to grow and thrive."

Translating the rage against government that has motivated right wingers since the days of St. Ronnie of Hollywood (and before) into actually governing the greatest nation on earth is something that Rethug wingnuts haven't bothered to figure out. Voters need to take notice.

(image: Demented, and funny at the same time)
Posted by Hackwhackers at 11:40 AM