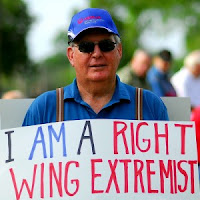 It's amusing to see the Rethug establishment's pathetic record in their primaries or nominating conventions thus far, thanks to the teabagger Armey, er, army. In Nevada, Alaska, Utah, and Colorado, the Rethug establishment's preferred candidates went down to defeat to teatards. Now you can add Senate nominees in Delaware and New York to the list. Sadly for the Rethugs (snicker snicker) they can also probably remove some states from their likely wins in November as a result (thank you Nevada, Colorado and Delaware).

(Photo: No shit, Sherlock)
Posted by Hackwhackers at 10:50 AM