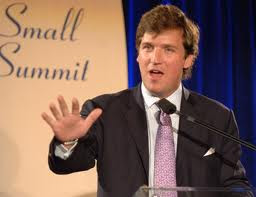 When Keith Olbermann was suspended by MSNBC last week, Philadelphia News columnist Stu Bykofsky wrote a column about it and e-mailed who he thought was Keith Olbermann for comment. What Bykofsky thought was Olbermann's e-mail address -- "keitholbermann.com" -- was actually a site owned by our favorite preppy douche, Tucker "Mothertucker" Carlson. Since Mothertucker's social development stopped at the age of 13, he wrote back to the columnist with insults and more, pretending to be Olbermann. This continued until Yahoo News (!) discovered the deception, and Mothertucker fessed up.

When President Obama called on his countrymen to "set aside childish things" in his inauguration address, clearly Mothertucker was playing with his toys, or perhaps himself. While he professes to be some sort of "journalist," this episode demonstrates that Mothertucker's just another silly product of right-wing nepotism, slipping whoopee cushions under the adults in the room to get a laugh.

(photo: Mothertucker addresses his fan club)
Posted by Hackwhackers at 11:00 AM