It's Why We Call Them "Rethugs," Cont. 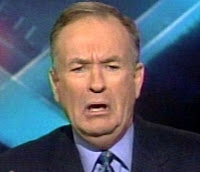 Fox "News" gasbag and house "moderate" Bill O'Reilly recently used some violent imagery to describe what he'd like to do - or have done - to the Kaplan Daily's Dana Milbank ("Just kidding!" says O'Reilly, which of course makes it all ok!). All because Milbank wrote a column after the election pointing out the obvious: the Fox "News" personalities were gloating all election night about the Rethug victory. And why shouldn't they, since they were so helpful in getting out the Rethug talking points?

If medals were given out for smug assholery, O'Reilly would have a chest full of them.