"Let's Pretend It's A Mandate Anyway" 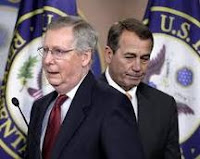 Rethug leaders in Congress have been claiming arrogantly that the Dems need to heed the message "sent" by the voters in the midterm elections. As it turns out, a CNN/Opinion Research poll reveals that the voters didn't give the Rethugs a mandate at all. Only 17 percent say that the elections were a mandate for the Rethugs, with only one in three thinking the Rethugs will do a better job than the Dems.

So put away the big foam #1 hand you've been waving, Rethugs. It appears that you need to absorb a message, too.

(photo: While the claim of an electoral "mandate" was premature, don't expect Missy and Boner to stop calling it one)
Posted by Hackwhackers at 11:13 AM