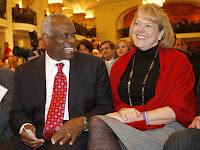 Reports are surfacing that Supreme Court Justice Clarence "Long Dong Silver" Thomas failed to report uber-wingnut wife Ginni's income on financial disclosure forms... for the past 5 years. According to Common Cause, ninny Ginni earned over $686,000 from the right-wing Heritage Foundation, a rather large (Long Dong Silver-esque) number that somehow Clarence failed to recall when filling out his financial disclosure forms - which are, of course, intended to flag any potential conflicts of interest. As some in the blogosphere are noting, what do you think would have been the reaction in the Drudge-ruled "mainstream media" if, say, Justice Breyer had had the same "lapse" of memory?