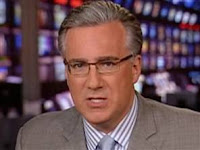 Shockingly, sadly, tonight's was the final "Countdown with Keith Olbermann." He announced he's leaving MSNBC, with no further word about his future plans. "Countdown" was MSNBC's top-rated show, which made the abrupt departure all the more mystifying. It's also a significant blow to progressives, who saw few of their champions in the media; one as articulate as Olbermann will be sorely missed.

It occurred to us that maybe, just maybe, the ending of "Countdown" might have had something to do with the recently approved sale of NBC to Comcast. It's also possible the famously mercurial Olbermann had strictly personal reasons for leaving.

Whatever the reason, he leaves a void that will be difficult, if not impossible, to fill. As Keith would sign off, "Good night, and good luck."
Posted by W. Hackwhacker at 10:10 PM