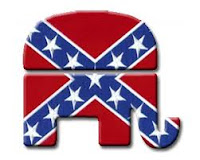 The official response to the President's State of the Union address was delivered by reactionary Rethug Congressman Paul Ryan (Social Darwinist - WI), whose touted "Roadmap for America's Future" would do away with Medicare and disrupt Social Security. Unfortunately for him, he came across as an earnest young funeral director, talking in solemn and almost grim terms about the future. Of course, he didn't mention the improving job numbers, corporate profits and bullish stock market -- signs that the stimulus and other Obama measures are working, albeit slowly. After watching Obama's hopeful and positive address, it was a downer watching the official Rethug response -- they truly have nothing but "cut spending and cut taxes" in their repertoire.

Since Ryan's type of right-wing rhetoric isn't enough for the unhinged base of the Rethuglican/New Confederate Party (a.k.a., teahadists), Minnesota's crackpot Rep. Michele "I See Commies" Bachmann trotted out her singular type of divisive crazy talk on the Tea Party Express web site. Her remarks were sprinkled with the usual nuttery about "America is under attack," and the lie that reform is "government-run" health care to be policed by "16,500 IRS agents." Seriously. In clips of her remarks that were shown on the news this morning, she appeared to be staring off into space while speaking. While that was attributed to having two different cameras present, it certainly captured the spacey quality of the loon from Minnesota.
Posted by Hackwhackers at 9:49 AM