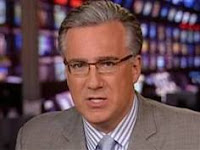 Current TV is announcing that progressive commentator Keith Olbermann will host his own show on their network starting in the late spring. Olbermann will also serve as the cable channel's "chief news officer." Olbermann left MSNBC late last month.

Current TV was in the news a couple of years ago when two of its reporters were detained in North Korea and were freed after former President Bill Clinton traveled there. Former Vice President Al Gore is chairman of Current TV.
Posted by Hackwhackers at 3:50 PM