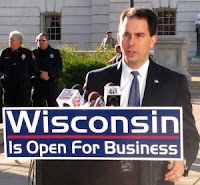 It's becoming increasing clear that Wisconsin right-wing hack Gov. Scott "Too Much Johnnie" Walker's poll numbers are heading south fast. . . far enough south that they may reach the Illinois state line and the 14 Dem State Senators. While putting on an arrogant public face, in private the Guv has to be drowning in flop sweat, now that 51 percent strongly or somewhat oppose Scottie's union busting moves. Even worse for the Koch-head Governor, 68 percent of Wisconsin's independent voters -- ones that sadly put him in office -- are against his actions. And the polls keep widening as he digs in his little heels.

So keep up the good work, Scottie, and whatever you do, DON'T NEGOTIATE.

(photo: Get the transporter ready, Mr. Sulu)
Posted by Hackwhackers at 2:52 PM