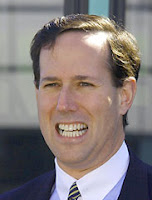 Far-right ideologue and former Pennsylvania Sen. Rick "Santorectum" Santorum has announced his formation of a fundraising committee as a preliminary step to running for the Rethuglican nomination in 2012. As one of the most extreme right wingers in the Rethuglican/New Conservative Party, Santorectum is a favorite of the American Taliban social conservative movement for his positions on gay marriage and women's reproductive rights. He lost by double digits to Dem Sen. Bob Casey in 2006, and has been a Fux "News" contributor recently.

On April 20, 2003, Santorectum declared in an interview with the Associated Press,

"In every society, the definition of marriage has not ever to my knowledge included homosexuality. That's not to pick on homosexuality. It's not, you know, man on child, man on dog, or whatever the case may be."

He was widely ridiculed for comparing gay marriage to pedophilia and bestiality, and was the target of a gay syndicated columnist who coined a sexual neologism for "Santorum" and proceeded to Google-bomb the term, once making it the top search result on Google for the former Senator's name. And may it be so once again.
Posted by Hackwhackers at 9:20 AM