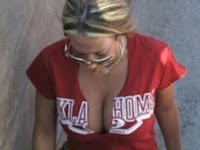 In today's Kaplan Daily, there's an interesting article about the antipathy of many in the fine State of Oklahoma toward federal spending. The feeling is summed up by lawyer John Hager, who says "I'm not sure what they [the feds] do has a big impact on my life." The article goes on to present a few facts about the relationship between the federal government and Oklahoma:

-- Oklahoma gets back $1.35 for every $1 its residents and businesses pay in Federal taxes;

-- 7% of the Oklahoma City region's workers are federal employees (more than double the national average), and Federal spending on highways, an FAA center and Tinker Air Force Base employs 20,000 civilians, pumping millions into the prosperous Oklahoma economy;

-- Oklahoma is the most Republican state in the Union (Obama didn't carry a single county), with Rethugs holding 70% of the State's legislative seats.

With all this in mind, and the fervent desire of teabaggers and small gummint ideologues everywhere to defund the federal government, Hackwhackers proposes that we start with Oklahoma: the rugged individuals who go about their lives in blissful ignorance of the benefits they take advantage of while simultaneously railing against federal spending should be the first to step forward as the patriots they (think they) are and take an immediate cut in federal spending, to bring their 1:1.35 tax/spend ratio into perfect balance. How about it Oklahomans?

(Image: Two of the many boobs residing in Oklahoma)
Posted by W. Hackwhacker at 8:57 AM