Civil Rights and the Right 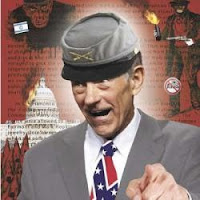 When you peel the veneer off of a right winger, you normally find someone who believes that their rights are more important than yours, especially when they're white and the other person isn't. Case in point: Rethug "libertarian" and Presidential candidate Ron Paul. In an interview yesterday with Chris "Tweety" Matthews, Paul said we'd be "better off" without the Civil Rights Act of 1964. That Act guaranteed non-discrimination in voter registration, and places that serve the public (hotels, restaurants, etc.), among other provisions. Not surprisingly, Paul based his opinion on the issue of "property rights," which is the holy standard of libertarians / Randians. Seems it was also the issue that started the Civil War, if by "property" you meant black slaves.

To illustrate how far Paul and the right wing fringe has moved the Rethuglican / New Confederate Party since 1964, 80% of House Rethugs and 82% of Senate Rethugs voted for the Act. How times have changed.
Posted by Hackwhackers at 1:25 PM