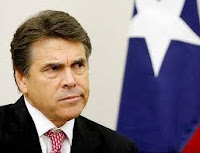 Regthuglican Gov. Rick "Hair" Perry (New Confederate Party - TX) has some explaining to do. A long article in this morning's Kaplan Daily indicates that the hunting camp owned by the Perry family had a racially offensive slur painted on a rock outside of its gates. The word "Niggerhead" was painted on a large flat rock next to the gate to the camp for many years, with several witnesses claiming it was only painted over with white paint in the last several years. According to the paper, the Perry campaign is not commenting on the story.

While racial slurs won't hurt the Texas Ponz with the rabid teabagging base, it's another, um, rock in the wheelbarrow for him to carry into the debates, especially if he's refusing to discuss the particulars. It also provides context for his comment last year suggesting that Texas might secede from the United States if it didn't approve of Federal laws.

(photo: "Dayam, Ah thought Ah asked that colored boy to paint that rock good.")
Posted by Hackwhackers at 9:46 AM