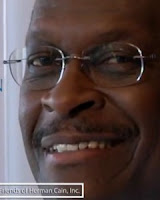 There is a new report that pizza pusher and Rethuglican Presidential candidate Herman "Herb" Cain may have been involved in sexually suggestive behavior with two women while working at the National Restaurant Association in the 1990s. The women later took financial settlements and left the Association. The report was published in Politico, and picked up by the New York Times.

Herb already has some 'splainin' to do to fundamentalist wingers, who were very unhappy with his seemingly pro-choice position that he voiced on a Christian broadcast channel a few days ago. If this story has legs, Herb has the option of pulling a "Jimmy Swaggart" and crying his way out, or a "Clarence Thomas" and claiming a high-tech lynching.

(photo: Now we have a better idea of what's behind that slow, creepy smile)
Posted by Hackwhackers at 11:13 PM