Missy's Aversion To The Truth 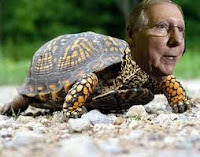 Rethuglican Senate Minority Leader and turtle impersonator Mitch "Missy" McConnell appeared on CNN yesterday and tried to claim that his band of obstructionist Rethugs haven't been to blame for the failure to enact key legislation on job creation. Daily Kos has put together a montage of videos to prove Missy is lying through his brown teeth. Missy is on record as having infamously declared that the Rethugs' main goal was defeating Obama -- not job creation, not health care, not deficit reduction, etc.

Optically, the Dems "controlled" both houses of Congress from January 2009 through January 2011, but as Missy helpfully points out in the video, in the Senate you need a "super majority" of 60 votes to pass anything, and the Rethugs were successful in blocking or watering down key Obama proposals.
Posted by Hackwhackers at 3:34 PM