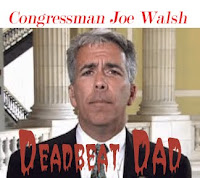 The so-called "Family Research Center" is a fundamentalist political organization working on behalf of the Rethuglican / New Confederate Party. Their right-wing leadership has a selective approach to Christianity, which doesn't involve aiding the poor, healing the sick, etc. It can better be described as a free-market, I've-got-mine perversion of "Christianity" which fits with the Rethug ethos perfectly.

Now, they've gone one better in giving Rethug Congressman Joe "Deadbeat" Walsh a 100% rating for being "pro-family." Not sure which family Deadbeat is pro, but it's not his ex-wife and two children, to whom he owes $100,000 in child support. Not that he's poor -- he earns $174,000 per year. Get this, in accepting the accolades, Deadbeat had this to say:

“Defending American values have (sic) always been one of my top priorities, and this reward reaffirms my dedication to that fight.”

Wow, the sheer hypocrisy of someone who talks about "American values" while stiffing his family of the financial support they are entitled to. A-hole.
Posted by Hackwhackers at 2:22 PM