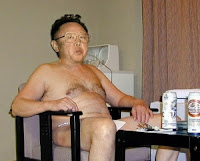 North Korean State Television has announced the death of North Korean dictator Kim Jong Il at the age of 69. The strange, reclusive dictator was the son of former North Korean leader Kim Il Sung, and was reported to be suffering from diabetes and heart problems. His son Kim Jong Un is expected to succeed him in what has become a Stalinist monarchy.

Your comment may be the first time the word "taste" has ever been associated with this thug. I'm not sure there is any basement on the appropriate expression we might allow ourselves about someone who would let his own people starve. P.E.C.

We wonder why we haven't heard from "Dae Hyun from North Korea" on this...