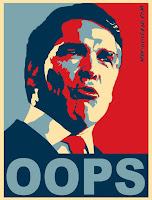 Soon-to-be-former-candidate Rick "Hair" Perry (R - Oops) has an ad running in Iowa that accuses President Obama of conducting a "war on religion," and points to having gays serve openly in the military as a moral problem. While most observers are regarding this ad as a desperation move by Hair, who is in single digits in the polls, there was even dissent among his advisors whether to take on gays and the culture war. His top pollster, Tony Fabrizio, went so far as to call the ad "nuts."

We're certain that the country will be spared a Hair Perry presidency, but it's a shame we still have to be exposed to his shameless and dishonest ads for the next few weeks as he throws every smear against the wall to see what sticks.
Posted by Hackwhackers at 2:47 PM